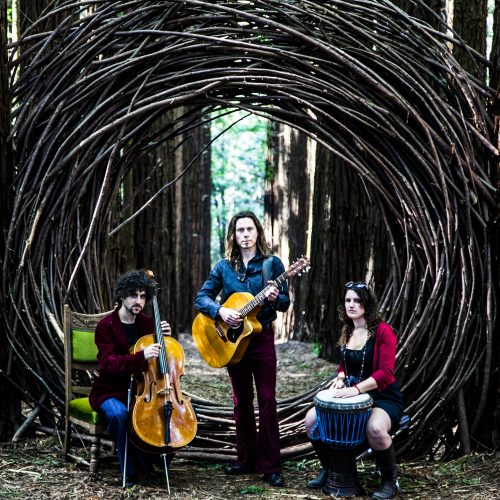 The Anecdote are a captivating, virtuosic, and fire-spirited indie-folk trio. With cello, trumpet,
percussion and soaring vocals, their music is a marriage of finely sculptured songs, poetic
wordsmithery and spine-tingling improvisation. Drawing from elements of folk, world music,
reggae, jazz and singer/songwriting, The Anecdote enchant with their one-of-a-kind songs,
striking instrumentation and searing emotional depth. They are a stunning live experience.

The Anecdote launched their debut album ‘Carved Upon The Air’ in April 2017. The album is a
profound work, with songs written over a 15-year period, rich string and brass arrangements, and
a rare poetic beauty. The songs are delivered with compelling directness and haunting intimacy.

Since forming in 2014, The Anecdote have become a seasoned festival act, performing at a range
of festivals including Folk, Rhythm and Life, Renaissance Festival, End Of The Line, River Folk
Festival and EarthArtBeat. The Anecdote have supported such esteemed artists as The April
Maze, Stray Hens, Tenzin Choegyal and The Bean Project.

All Sessions by The Anecdote